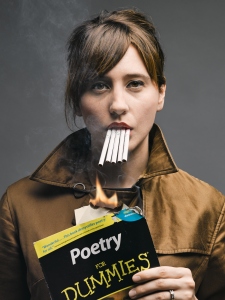 Though Split Lip Press does not condone or promote smoking cigarettes, take a look at this pic of Katie Schmid, winning author of our Turnbuckle Chapbook Contest with her manuscript Forget Me / Hit Me / Let Me Drink Great Quantities of Clear, Evil Liquor. Such a cool photo, but even cooler, her book tentatively forthcoming sometime in late summer. Stand by for the official release date announcement.

Though a tough decision, our guest judge Meg Pokrass selected Katie’s manuscript as winner, finding it original and expansive in its entirety, and I concur. The collection is diversified with regards to both content and form. Her poetics are delicious, and she is astute in discerning the form that will serve a given poem best, ranging from those only in line, others broken in stanzas of different lengths, others with some long lines / some short lines, others as prose poems, some formatted with text aligned to the right or centered, and my favorite part, her series in the middle called “Daughter Psalms,” which are not individually titled pieces, just blocks of text unified by the series’ title placed mid-page on each page of the section. Another cool part is a series of prose poems titled “The Boys of the Midwest,” followed by a number as per the order they appear in. And, most importantly, the quality of her writing is masterful and striking––full of risk, balanced and tasteful shifts in diction choices, daring syntactical moves, and a touch of wit within otherwise dark, haunting poems––how, at times, such wit serves as a stepping stone to begin a lineage of rising tension as seen in “Some Brief Information About the Spartans”––

Dear god, the escalation: a gritty denotation of the Saint Jude figure.

And then how she manages to personify her narrators and characters with such a high degree of verisimilitude. It fascinates me, like this passage in “Letter to the Midwest”––

I too, am afraid that I can never escape:

these cracked sidewalks, the empty storefronts

who lie in doorframes with their abandoned

bodies in a puddle of vomit. And me:

I wake to find myself scuffed, badly bruised,

with the lightest touch.

Beautifully tragic in my opinion.

So, that’s the skinny on our winner Katie Schmid, but let’s give props to those contestants who wound up finalists:

In the Valley of the Sun by Gleah Powers

The Prophetic Western by Meredith McDonough

Stranger Underneath by Trish Hopkinson

Take Me Home by Sarah Levine

Tiger Laughs When You Push by Ruth Lehrer

Comments? What do YOU have to say? Cancel reply