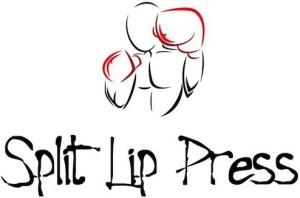 Some have asked how I came up with Split Lip as the name for the press and magazine. Kind of funny, too. Literary analysis geeks have tried to figure out the correlation between our brand name and the content we publish. Here’s a hint: There is no correlation, so go take a breather and get back to cracking the codes of Jack London and Kate Chopin because there’s nothing to analyze up in here. Anyway, the name – Am I a Split Lip Rayfield fan? Not exactly. Do I enjoy the sight of blood dripping from one’s mouth. Nope. Am I big fat copy cat who is stuck in the early 90s? Yep.

Twenty years ago, I was active in the Indianapolis hardcore underground music scene, a bunch of pissed off kids onstage playing guitar and screaming into microphones or offstage moshing in the pit, the hardcore equivalent of line-dancing. I spent a lot of time at a local punk venue, The Sitcom, listening to Jackhammer, Shelter, Birthright, Endpoint, et cetera, and I liked it. I liked things loud. I liked to get injured in the mosh pit. I liked the angst of it all. And I really liked my favorite band from back then: the Split Lip, a band that produced one of my favorite records, For the Love of the Wounded, a record I still spin today.

Besides their music, I am inspired by the longevity of the band. While most bands of that era came and went like Little Caesars’ employees, Split Lip continued. Of course they outgrew their days of teenage punk, but instead of throwing in the towel, they grew up and moved on to name themselves Chamberlain and punk became an influence on their music rather than a definition. Guitarists Adam Rubenstein and Clay Snyder pawned off their DOD metal distortion pedals in exchange for Ibanez Tube Screamers and let go of their solid-state Crate rigs for lower wattage tube amps. Bassist Curtis Mead stopped strumming power chords and developed a more melodic approach to the bass, much like Carol Kay. Their almighty drummer, Charlie Walker, stowed away his chops and laid down the boom pop, boom boom pop grooves. Lastly, vocalist David Moore stepped up as a front man, dropped his screaming and developed a unique voice with hints of Springsteen and Petty present in it. I hate categorizing music, but think Goo Goo Dolls meets Dire Straits? Something like that? Kind of? Or Springsteen meets The Screaming Trees? I don’t know. I’ll give you a hint, though. They did not sound like Los Lonely Boys.

So, Chamberlain did their thing for a good while – up until the early 2000s. But all good things come to an end. The band called it quits in 2005. BUT. David Moore and Adam Rubenstein continued to write and catalog music, which resulted in David Moore’s solo record, My Lover, My Stranger, another one of my favorite records, along with Adam Rubenstein’s Excavator, another great record. Drummer Charlie Walker has also maintained a presence in the music industry as drummer for Bush and Helmet.

I could write more on the evolution of these musicians, but I wanted to make it clear that not only did I name the magazine Split Lip because I thought it would sound cool; I named it after a band that represents birth, progress and longevity–my hopes for the magazine.