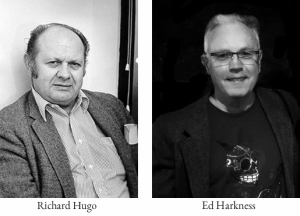 Ed Harkness was selected by Michael Meyerhofer as runner-up in Split Lip’s 2014 UpperCut Chapbook Awards. His new chapbook, Ice Children, to be published by Split Lip Press, is set for release on November 21, 2014. In this quick essay, Harkness talks about his first encounter with poet Richard Hugo and his time studying with him at the University of Montana. Though, in the spirit of Hugo, Harkness is an artist above academic, his essay concludes with Harkness’ defense for the MFA. Find out more about Harkness at www.edharkness.com.

My Time with Richard Hugo by Ed Harkness

I first met Richard Hugo not in Missoula, where he taught at the University of Montana (UM), but rather in Seattle in 1970. He’d come to teach a summer poetry class at the University of Washington, where I was just eking out my BA in English. The precise moment I felt the arc of my life change was when I heard Hugo read on a sweltering August afternoon in Savery Hall. The boom and crack of his voice (“You might come here Sunday on a whim. / Say your life broke down.”) gave me a chill in the overheated auditorium. I had no idea poetry could sound like that: hard, loud, clear and fierce, like a jackhammer in the hands of a musician. I resolved that I’d follow this man anywhere. And that’s what I did.

Robert Wrigley, a poet I much admire and whose work has also appeared in Split Lip Magazine, shares with me a lucky distinction. We both studied with Richard Hugo at the UM way back in the 1970s. I can’t speak for Bob, though I doubt he’d disagree, but my connection to Hugo for those two years in the MFA program were life-changing. I’ve tried many times to explain to others—and mostly failed—what it was about Hugo that made him such a remarkable teacher and mentor. After all, those of us who got to study with Dick were doubly blessed to be students of his colleague and friend, Madeline DeFrees, a wonderful poet in her own right, and, like Hugo, a gifted and nurturing guide for us young writers.

Here, then, is one more effort to say what it was about Hugo that drew many of us to him.

Despite what might seem to be the grim and sometimes glum tone of his poems, Hugo was really funny, in class and out. He loved funnymen like Jack Benny and Groucho Marx and could quote freely from Marx Brothers films like Duck Soup. The line I remember Dick repeating (more than once) is Groucho’s exhortation to his men during a comically absurd battle scene, made, as always, at the expense of the stuffy society woman played by Margaret Dumont, Groucho’s hapless foil in many Marx Brothers films: “Remember,” Hugo said, in his bad imitation of Groucho, “you’re fighting for this woman’s honor, which is probably more than she ever did!” Hugo would explode with his bellowing laugh, and the roar was so loud that it frightened some of us rather serious graduate student into laughing along with him. In turn, if someone in class said something funny, or quoted from the same movie, Dick would roar even louder.

More than once Hugo told me that had he not become a poet and English professor, he would have liked to be a comedy writer. His love of jokes and funny lines from movies and poems kept everyone loose. One line I remember that he claimed came from a student in a class he taught in Seattle went like this: “By the shores of Lake Sammamish [near Seattle], I sat eating a ham sandwich.” He’d pause to let the ridiculous line sink in, then his booming laugh would rattle the classroom windows. We loved it, just as we loved his awful off-color limericks.

In demeanor, Hugo was the opposite of the stereotype of the erudite scholar standing before the lectern. In fact, I never recall him lecturing. He just talked poetry. Sometimes he’d even poke fun at his colleagues in the UM English department, mocking their slightly formal speech. “At an English meeting the other night,” Dick once told us in class, “a guy next to me looked at his watch and actually said, ‘Considering the lateness of the hour…’ Jesus Christ, why not just say ‘It’s getting late’?” It was Hugo’s way of reminding us of the divide between “us” and “them,” the flakey creative writers and the more serious-minded academics and their pompous way of saying things.

The truth is that Hugo knew more than we ever would about poetic technique and could, if the mood struck him or the moment seemed right, recite whole poems by Roethke or Yeats or Bogan by way of illustrating a point about rhythm or the gunshot-like power of single-syllable words (“…Stumbling upon the blood-dark track once more…” from Yeats’ poem “Hound Voice”). Often, in commenting on a student workshop draft, Dick would go so deep inside the poem it was as if he knew more about what was going than its author did. But his comments were usually less interpretive and more about the mechanics of the poem, its syntax, diction and rhythm, or the “stance” the poem projected. “The words are fine,” he’d say of a student poem, “but there’s no stance.” He’d then add, “If your poem doesn’t have a stance, make one up, the weirder the better.”

In his writing workshops, he wasn’t big on theory but rather stressed the practical matters of writing poems, including such mundane issues of whether to use pen or pencil and what kind of notebooks to buy (pencils only, #2; hard-backed notebooks with green-lined paper, as he recommends in the chapter “Nuts and Bolts” in his classic book of essays on writing, The Triggering Town).

But Hugo also understood the complicated psychology of being a writer, and many of us loved to listen to him explain to us what it was we were doing, and why, since some of us (me) didn’t have a clue. Hugo offered much-needed “reasons” that justified our efforts at trying to be poets, a main one being the need to assert, in our poems, that our lives mattered, even when the world said otherwise. These justifications were both illuminating and comforting and can be summed up by things he said in class and later wrote in The Triggering Town: “You owe reality nothing and the truth about your feelings everything,” “Never let facts get in the way of the imagination,” “To write a poem you must have a streak of arrogance—not in real life I hope. In real life try to be nice.” He encouraged us to be fearless, to risk being melodramatic, even sentimental in our poems—edging up to the line between sentiment and sentimentality, but not crossing the line. “All great art,” he’d say, “has an element of schmaltz or corn.” He’d challenge us to “write off the subject.” That last phrase, made famous in The Triggering Town, may be Hugo’s most subversive idea about the creative process. It was his way of saying “Stop making sense!” What he asked was that we teach ourselves, to discover, in the act of writing, our own voices and ways of sounding, and to give at least as much attention to the music of words as to their meanings.

Hugo as mentor and friend.

During my time (early ‘70s) at the UM, Hugo lived alone, having divorced his first wife some years earlier. In that span of several years before he met and married Ripley Schemm in 1974, Dick sought out social connections, first by spending much time at local bars, where he became a regular, and later, when he stopped drinking, looked for companionship from his graduate students and teaching colleagues, male and female, to go out to dinner or to a movie, or on the weekend go fishing at one of the many lakes and reservoirs near Missoula, or go on a drive to one small Montana town or other. One such drive inspired what may be Hugo’s best-known and most powerful poems, “Degrees of Gray in Phillipsburg.”

One afternoon Dick asked if I’d like to accompany him on a drive up to the Flathead Reservation north of Missoula. Of course I said yes. The aim of this drive, Hugo told me, was to deliver a copy of his just-released book, The Lady in Kicking Horse Resevoir, to Victor Charlo, a Salish elder and poet. One of the poems in the book was dedicated to Charlo. In fact, Dick dedicated at least half of the poems in that book to specific individuals—friends—and titled two sections of the book tellingly: “Montana With Friends,” and “Touring With Friends.”

Another time Hugo took me fishing to that very reservoir, Kicking Horse, a subject I wrote about in detail in a reminiscence I published in Fine Madness (Vol. 2, #1) shortly after Dick’s death in 1982, titled “‘Someday I plan to Visit Everyone I Love’: Remembering Dick.”

Here, then, was another way that Hugo was, for many, unlike any teacher they’d ever had. He removed the artificial wall between his role as professor and personal friend. You’d attend his class, and that Saturday he’d invite you to go with him to the local park and watch a fast-pitch softball game. Even after he remarried, Dick and Ripley maintained friendships with his students and writer friends, inviting them to barbeques at their house on Wylie Street in Missoula.

University writing programs, like the MFA program at the University of Montana, sometimes come under attack for producing a kind of standardized, homogenized poetry, characterized—according to the critics—by an arch cleverness, blandness and a lack of emotional punch. I don’t buy that sweeping claim, but I’ll save that debate for another day. For those who like to talk about all that “bad” contemporary MFA poetry, go find a book called A Heap O’ Livin,’ by Edgar Guest, a wildly popular American poet of the 1920s, decades before the invention of the MFA degree, and see if you can read Guest without gagging. My experience as a student in the UM MFA program, where I got to know and learn from Richard Hugo and Madeline DeFrees, and from other writing teachers as well, including the novelist and short story writer Bill Kittredge, was a two-year treasure I wouldn’t trade for the world.