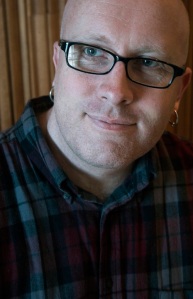 My name is J. Scott Bugher, founder of Split Lip Magazine, an online venue that features literature, music, fine art and film. Back in March 2014, we held our first chapbook contest: The Uppercut Chapbook Awards, so now we’re in the business of bookmaking. We’ve got The Bear Who Ate the Stars by contest winner Julia Kolchinsky Dasbach and Ice Children by runner-up Ed Harkness. Both titles are scheduled to release in September this year. For a sample poem from each book, you can visit HERE, where you can also listen to the poets read their work. Additionally, we have Love & Sundries by Nicholas Reading scheduled to release in November, 2014.

As a former top Nashville session musician, my mission with Split Lip Press is to catch the literary world up with the music industry. Big book deals and big record deals are things of the past unless your books are branded under James Patterson or if your record is pop country or R&B. What are writers doing about this? Frankly, I don’t see them doing much but continuing to sit on their manuscripts, paying hundreds of dollars in contest or reading fees and hoping to win the attention of an editor to get their big break. What are musicians doing? They’re telling the music industry to fuck off and taking matters into their own hands by signing on with small independent labels and releasing their music DIY style.

Thing is: Musicians no longer make demo tapes and send them to major record labels only to wait a long time to hear back when they most likely will not. That’s simply too much time to waste. Demo tapes have been rendered obsolete in the music business, but they are alive and well in the literary world. What? Demo tapes in the literary world? Yes. They are in the form of 8.5″ x 11″ sheets of paper usually taken by a writer to a reading event. They will read from them and, if it’s been picked up by a big publisher, announce that it’s forthcoming in a year or two. Guess what prospective fans do in a year or two. They forget about the writer. They don’t go home and mark their calendar two years out and wait. Split Lip is here to help in eliminating literary demo tapes because, frankly, they’re of no use other than for a writer to read from. I remember attending a reading given by a rather good poet. I asked about a certain poem, where I could find it. He told me it’s in a manuscript that had been taken by some major publisher with an undetermined release date. Here’s what he does: He gives me the demo tape sheet of paper, and I thank him. Oh, but that was not all–– He tells me to hold on, grabs a pen, and then autographs it. It doesn’t get anymore anticlimactic than that, folks. Good writers need to have books. Ever go to a concert where bands are autographing demo tapes? No. They have records, proper and well-designed.

Sure, Split Lip can’t publish everything we receive for matters of whether or not the manuscript fits the Split Lip brand and/or room in the budget, but we are here to take manuscripts from writers we feel are a good match for us and get their books out quickly. None of this “forthcoming 2023” shit. We also want to do our best with profit-sharing, so we give our writers a 25% cut as opposed to the 10% – 15% norm. We do our best with promotion as well: discounted rates for website design, solicit book reviews or release announcements, and help organize blog tours––whatever we can do.

We’re on WordPress because blogging is what we’re supposed to do, right? Damn. Gotta think of all sorts of shit to keep you all entertained. That’s a lot of pressure. We’re not only blogging, though. We’ve got a website in the works right now, which will be announced and blogged about here.

So that’s my introductory blurb, everybody. Check back in with this blog for more news. I’ll be posting about our forthcoming book releases, our authors’ websites, opinions on the publishing scene, projects in the works, and plenty of folly. Thanks for reading, and stay tuned for more.

Comments? What do YOU have to say? Cancel reply